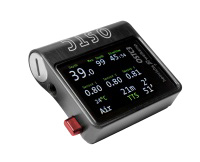 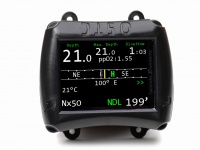 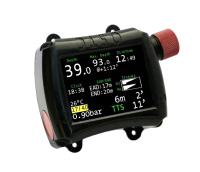 [3.16]
MD5: c82632f2d1efcca365f418e72b22cedc
BUGFIX: Sensor detection in OSTC plus could fail for some hardware versions
BUGFIX: calculate time/date of the end of the dive in logbook screen correctly for
dives with a lot of surface time/many descents
NEW: Different brightness settings for dive and surface mode
NEW: minor changes in the different language versions
BUGFIX: Reduce sleep mode current

[3.10]
MD5: 3a2e43381ce352f785096810cad19a33
- Hardened all USB/Bluetooth communication against data losses and timeouts
- A new Firmware Recovery Feature has been added: the currently active firmware
can be backed-up and restored later on while other firmwares have been loaded
thereafter. The feature is accessible via Settings -> System Settings ->
Reset Menu -> Reboot and becomes available with the first firmware load after
the V3.09 beta 4 (or later) is already on the unit.
- New option to acknowledge the most recent warning in dive mode (Left press -> Ackn?)
- Removed option 'ascent speed', ascent calculation is done with a fixed
speed of 10 meters/minute now (equals the ascent speed limit by Bühlmann).
- Improved calculation accuracy of the initial ascent. Remark: this will
have a slight impact on the resulting deco schedule compared to firmware
3.08.
- The deco calculator now figures in the salinity setting.
- Aligned logbook and last dive summery of avg and max depth regarding
rounding and incorporation of salinity setting.
- Done some fine-tuning of depth outputs when using imperial units (feet).
- In dive mode, sometimes the temperature was not shown any more after a
gas change - fixed now.
- The menu system around setting up the dive mode & settings has been
decluttered. All settings are now sorted into the groups dive setup,
deco setup, SAC (gas needs) setup, ppO2 setup and stops & depths setup.
- There is a new option "Swap on empty" in Dive Setup -> SAC Setup.
It is only effective if "CalcGas(B/O)" is switched on, too. If both
options are switched on, the deco calculation will switch to another
tank (i.e. gas) once the tank of the current gas is calculated to be
used up.
This function can be used to automatically calculate a contingency in
case of running out of a deco gas, as the deco calculation will then
continue to calculate a deco making use of the spares from the another
gases carried. Another application is with two or more tanks holding
the same gas (i.e. independent double configuration, side-mount), as
the calculations will then take the cumulative amount of gas carried
into account before raising a gas needs attention or alarm.
- Fixed the urge of the better gas hint to always favor one specific gas
out of a set of two or more gases that have the same change depth.
- For dives done on firmware >= 3.08 the logbook will have one more page
showing the tissue pressures and supersaturation levels as of at the
end of dive (i.e. when surfacing).
- As long as a gas or diluent is currently selected as breathed, it can
not be set into the lost state any more.
- When changing the battery or doing a cold start, the current CNS value
does not get lost any more.
- During loading of a new firmware the clock will not loose time any more
(on old firmware it became late by about 15 sec on each firmware update).
- When run from a 3.6 V battery (either replaceable or built-in), the
surface mode timeout is now extended to 4 minutes before going to sleep
mode. If the OSTC is run from 1.5 V disposables, the timeout remains at
the previous 90 seconds to save on battery runtime.
- Internal improvement: the code for the internal storage system and for
the communication system (firmware uploading, dive data downloading)
has been re-factored to secure maintainability for the next years to come.
- Internal improvement: the scheduler for the dive mode calculation plans
(fTTS, bailout) has been completely rewritten for better maintainability.

CHANGE: In the Tech version, max. ppO2 limits can now be adjusted up to 2.0 bar.
Caution: know what you are doing! Recommended max settings are 1.4 bar for
work gases and 1.6 bar for deco gases.
CHANGE: CCR mode diluent ppO2 versus setpoint check can be disabled now.
CHANGE: Fine tuning of the better gas cue behavior.
CHANGE: Improved smoothing of compass display.
NEW: Attention and warning thresholds for gas density put into the options
table (adjustment via external software only, no mapping in OSTC menu
as of now).
CHANGE: Renamed OC gas type 'normal' to 'work' (gas for the working phase of the
dive). Along with this, it received a down-arrow symbol to depict it as
a gas for use at depth, similar to the '=' symbol that was introduced some
time ago to visually depict deco gases (imagine the horizontal lines as
deco stops).

EXAMPLE 1: Single gas dive:
set gas to use as 'first' and all other gases to 'disabled'.

EXAMPLE 2: Gas-change, extended no-stop dive:
set gas to start with to 'first', all other gases to be used later in the dive
to 'work' and the unused gases to 'disabled'.

EXAMPLE 3: Deco-dive with one gas for descent & bottom phase, and deco gases:
set bottom gas to 'first', deco gases to 'deco' and the unused to 'disabled'.

EXAMPLE 4: Deco-dive with a deco gas used as travel gas on ascent, bottom, and deco gases:
configure the deco gas twice: once as travel gas and once as deco dive. Set the
same change depths for both instances and put the travel gas before the deco
gas in the gas list (i.e: gas 1: travel, gas 2: work (bottom) gas, gases 3-5:
deco gases). Set the travel gas to 'first', the bottom gas to 'work', and the
deco gases to 'deco'. Take care to adjust the pressure available on the deco gas
which is used for travel gas, too, to the amount of gas that is planned to remain
after having drawn the travel portion from it!

- GF low can not be set higher than GF high any more as such a setting would produce
an illogical deco schedule.

- Moved positions of the GF values in the custom view such that 100/100 can be shown
without numbers graphically overlapping.

- The resettable stop watch shown in the compass custom view now has both of its
digits for the seconds shown as intended.

- As it will always be unknown how much power will exactly be available from a battery,
the threshold for a battery low warning has been rised from 10% to 30%. When in dive
mode, the display brightness will be set to ECO upon reaching this threshold, too, to
conserve as much battery power as possible. Anyhow, when the battery warning comes on,
it has to be expected that the OSTC may shut down without further notice at any time
due to depleted battery. It is therefore strongly advised to not start a dive with a
battery reading below 50%.

- The color-coding of the ppO2 shown in the custom view has been aligned with the color-
coding used in the ppO2 warning and attention message.

- Fixed the erratic gas needs of 999 bar when current depth is shallower than the depth
of the currently indicated stop.

- Gases whose ppO2 at current depth is between ppO2 max "normal" and ppO2 max deco are now color-coded
in yellow while not in deco yet (they were colored red before).

=> Resulting overall indications when violating a stop depth (in none-GF mode, 90% is used for GF_high):

1) When shallower than indicated stop depth but still deeper than ceiling *):   Attention on stop depth        (yellow)

*) In GF mode, the ceiling depth is calculated at GF-high, in none-GF mode at 100% supersaturation.

+ When there is a ceiling but not yet a stop obligation (deco will vanish during ascent):

+ When in deco with indicated stops:

+ when in deco with indicated stop(s) and shallower than the last stop:

- Eliminated a use of the GF-high parameter in none-GF mode.

- Improved and streamlined calculation of CNS values at end of dive.

- Improved switch-over from being within NDL to being in deco, and vice-versa. A stop time of ".." minutes will be shown
when there is already a ceiling obligation but deco calculation reveals that it will vanish during the ascent, given
the ascent speed limit is obeyed.

- Fixed a bug in the calculation of the initial ascent.

- Made overall deco calculations once more a little bit faster.

- Improved handling of the condition when a bailout plan can not be computed due to no breathable bailout gas available.

- Added an option for selecting if the max. depth or the average depth shall be shown in the main divemode screen.

- Improved stability of the timebases used for calculating the average depths.

- Improved energy saving by shutting down compass and accelerometer circuitry whenever compass is not shown.

- For those that like underwater navigation with compass: when the compass is shown, the temperature display will
be replaced by a display of the resettable dive timer.

- The better gas cue is now also given when switching while the dive to the manually set gas ("gas 6"). As long as
there is a regularly configured gas or diluent that fits for the current depth, a cue will be given towards this
regular gas/diluent. This cue can be suppressed by setting the cued gas/dil as lost.

- The tissue graphics in dive mode now also displays the number of the leading tissue whenever the current gradient
factor is > 0% or when in deco. (remaining todo: there is a light flicker in the output)

- Known limitation: after 18 hours, 12 minutes and 16 seconds of dive time:
+ The average depths will show erroneous values.
+ The resettable dive time will wrap around to 0.

- Stable Version -
BUGFIX: "lost gas" was re-activated in rare cases
BUGFIX: Internal deco planner did not display results in imperial units
BUGFIX: CNS display was out of scale (much too high) for some cases in the logbook
BUGFIX: pSCR ppO2 fixed
CHANGE: Battery names in "New Battery" menu (OSTC Plus and OSTC 3 only)

BUGFIX: Characters with descenders were not drawn correctly in rare cases

BUGFIX: Button sensitivity was not reset after update in some cases

NEW: Logbook marker can be set in dive mode menu (OC only)

CHANGE: Show velocity from 5m/min or more (Ascend or descent)

BUGFIX: Make sure SP1 is always selected on start in Auto-SP mode

CHANGE: Logbook now shows end-of-dive date and time for dives made with firmware <1.92 indicated by an icon in the logbook

CHANGE: Logbook shows start-of-dive date and time for dives made with firmware >=1.92